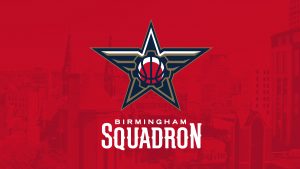 BIRMINGHAM, Ala. (Sept. 20, 2021) – The Birmingham Squadron and WATV 94.9 FM (900 AM) announced a multi-year partnership, making V94.9 FM the official flagship radio station of the Squadron. As part of the agreement, V94.9 FM will broadcast Squadron home and away games through the 2026 season.
“We are thrilled to join forces with V94.9,” said David Lane, Squadron General Manager of Business Operations. “We knew that partnering with a locally owned and operated radio station would give us the best opportunity to connect with the community, and V94.9 – under the leadership of Courtney French – gives us a great opportunity to do that. We look forward to a long and mutually beneficial partnership.”
Squadron fans will be able to listen to both home and away game broadcasts live on 94.9 FM and 900 AM when the team’s inaugural season tips off in November. The team’s full broadcast schedule will be released at a later date.
Squadron broadcasts will be called by a two-man crew led by Alabama Sports Hall of Fame broadcaster Eli Gold. Gold will be accompanied by Rick Moody, former women’s basketball coach of the University of Alabama and most recently an assistant with Syracuse women’s basketball.
Moody brings a wealth of basketball knowledge to the broadcast, including 17 years of coaching in the college ranks. He began his career as a head coach with the University of Alabama women’s basketball team in 1989, where he coached for 16 seasons (1989-2005). Over his tenure at Alabama, Moody led the tide to 11 postseason appearances including five consecutive trips to the Sweet 16 and one Final Four in 1994.
“I’m so excited that Coach Moody is joining our Squadron broadcast team. His knowledge of the game is unsurpassed, and the way he can communicate his analysis to our viewers and listeners will make him a fan favorite,” said Eli Gold, who was announced as the official voice of the Squadron earlier this month. “I’ve shared broadcast booths with Rick Moody for years, and I’m thrilled that we will continue to be able to work together. The season can’t get here soon enough!”
Moody finished his time at Alabama with a 311-176 record, the most wins by a single coach in school history (men’s or women’s basketball). He also left his mark on school record books with 26 wins in the 1993-94 season, the most in Alabama history.
“First and foremost, thank you to the New Orleans Pelicans organization for placing the Squadron in Birmingham, Alabama,” said Moody. “To say I’m thrilled for the opportunity to be a part of the broadcast team alongside Eli Gold would be an understatement. I can’t wait to get started!”
Loading