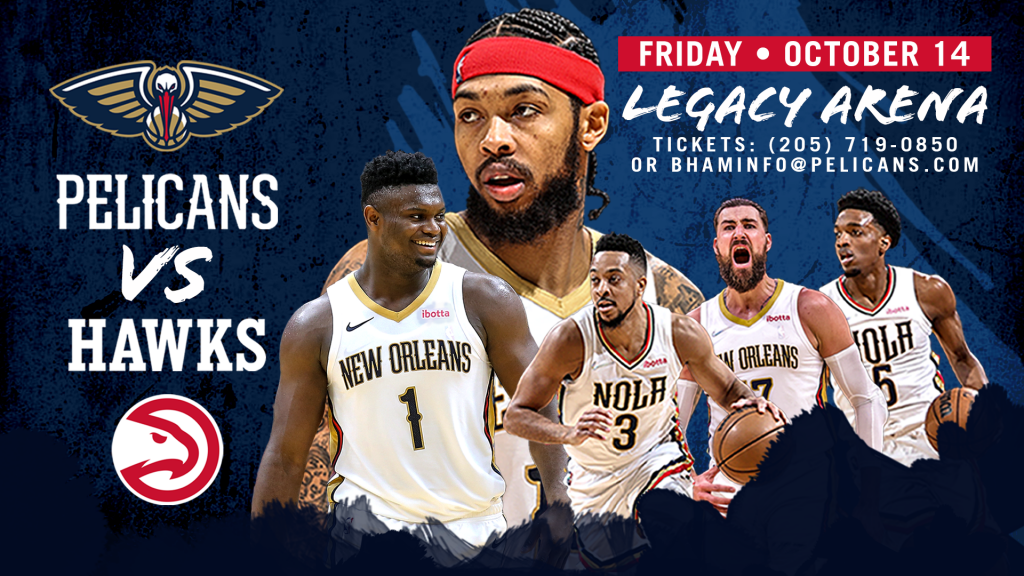 BIRMINGHAM, Ala. (June 21, 2022) – The New Orleans Pelicans announced today that the team will host a preseason game against the Atlanta Hawks on Friday, October 14, at Legacy Arena in Birmingham, AL – home of the Pelicans’ NBA G League affiliate, the Birmingham Squadron. Tipoff is at 7:00 p.m. CST.

“The decision to launch the Squadron was a commitment by the Pelicans organization to invest in the Birmingham community,” said Pelicans Governor Gayle Benson. “This Pelicans preseason game in Birmingham is a tangible example of that commitment, and this is just the beginning. We want to thank the City of Birmingham, the Birmingham Jefferson Convention Complex, and everyone involved in making this event happen.”

“This is a big deal,” said Birmingham Mayor Randall L. Woodfin. “As a basketball fan, I am thrilled to see these amazing teams battle it out. As the mayor, I am proud that this event can be enjoyed by our residents and visitors. This just further confirms that Birmingham is a destination for top sports event in our region.”

“Birmingham and Legacy Arena playing host to a NBA preseason game with the New Orleans Pelicans was exactly the kind of enhanced partnership opportunity we had in mind when first discussing bringing the Birmingham Squadron NBA G League team to Birmingham,” said BJCC Executive Director and CEO Tad Snider. “From the earliest discussions it was apparent the Pelicans organization and Gayle Benson had a genuine interest to partner with our city in a deeper way than just the team. With the inaugural season behind us just as we were completing the renovations to Legacy Arena, this announcement is a wonderful momentum builder leading into season two. NBA games in Legacy Arena in the past have been exciting for our community, and we expect this game featuring the Pelicans and Atlanta Hawks to be the best one yet.”