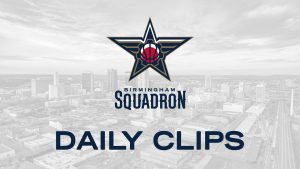 Birmingham Squadron announces inaugural season schedule
Alabama News Center
The NBA G League and the Birmingham Squadron have announced the new team’s full 2021-22 season schedule.
The Squadron will tip off its inaugural season on the road against the Greensboro Swarm on Friday, Nov. 5 at 6 p.m. The Squadron’s home opener is set for Sunday, Dec. 5 at 5 p.m. against the Mexico City Capitanes.
“This is an exciting day for the Birmingham Squadron franchise,” said David Lane, general manager of business operations. “Over the last several months, we have spent so much time planning and putting together an NBA-caliber in-arena experience for the city of Birmingham. Now we have the official dates to look forward to seeing our fans in the stands, and we can officially begin counting down the days to our first game in Legacy Arena on Sunday, December 5th.”
Legacy Arena in downtown Birmingham will be the home of the Squadron and will host 24 games this season. The arena is undergoing a $123 million renovation scheduled to be completed in time for the Squadron home opener.
The Squadron’s home opponents are the Mexico City Capitanes, the Lakeland Magic, the Memphis Hustle, the Iowa Wolves, the Salt Lake City Stars, the South Bay Lakers, the Austin Spurs, the Oklahoma City Blue, the Agua Caliente Clippers, the Santa Cruz Warriors, the Rio Grande Valley Vipers, the Texas Legends, the Sioux Falls Skyforce and the Stockton Kings.
The NBA G League’s 2021-22 season will split the schedule in two parts to bolster competition. The 50-game season will begin with a 14-game Showcase Cup that will conclude with the NBA G League Winter Showcase at a neutral site. The season will continue with a traditional 36-game regular season and G League Playoffs. At the conclusion of the regular season, the top six teams in each conference will qualify for the NBA G League Playoffs.
The Squadron’s 50-game schedule for 2021-22 includes 24 home games, 24 road games and two neutral site games at the annual NBA G League Winter Showcase. Showcase is the NBA G League’s annual in-season scouting event, when all of the league’s teams converge in one city to play in front of NBA general managers and player personnel executives from all 30 NBA teams. The 2021 event will be the 17th edition of the showcase.
The NBA G League – the official minor league of the NBA – features 29 teams. The 2021-22 season marks the launch of four new G League franchises, including the Birmingham Squadron, which is affiliated with the New Orleans Pelicans.
Much like the NBA, the G league is divided into two conferences, the Eastern and Western. The Squadron is one of 13 teams in the Western Conference this season and will play mostly Western Conference opponents.
Two new Squadron 8-Game Plans are on sale – the Gold Plan and the Red Plan. Beginning at $150, the Gold plan includes every home weekend matchup for the Squadron this season.
Beginning at $120, the Red Plan includes the Squadron’s home opener along with two Monday nights, two Tuesday nights, Two Wednesday nights and one Thursday night. Go to https://birmingham.gleague.nba.com/8-game-plans/ for more information on 8-Game Plans.
Go to https://birmingham.gleague.nba.com for more information on tickets and click here to see the Squadron’s full 2021-22 season schedule.
https://alabamanewscenter.com/2021/09/21/birmingham-squadron-announces-inaugural-season-schedule/
62-Year-Old Kelvin Davis takes his shot at New Orleans Pelicans G-League Team
Fansided
The current incarnation of the New Orleans Pelicans franchise has been around since 2002. That means someone my age, a sophomore in college, has grown up their entire life with basketball in the Big Easy.
Despite the team closing in on their 20th season in the NBA, they only recently established their developmental affiliate. Not even around for 3 seasons, the team has already moved and gone under a name change. Formerly the Erie Bayhawks, the franchise relocated this past season to Alabama and will go by the Birmingham Squadron.
Just like every G-League team does before the season, the Squadron held tryouts in hopes they could add talent to their current roster. A list of men with aspirations to play at the next level showed out, but one stood out above the rest.
62-year-old Kelvin Davis, a Hunstville, Alabama native, was of the prospects attempting to earn their spot on the team. Yes, someone the age of a grandfather is trying to play professional basketball. He’s played basketball his entire life and wanted to keep his dreams alive.
Just to put Davis’ age in perspective, he outdates modern professional basketball in New Orleans. The cities first NBA team was dubbed the “Jazz”, and its inaugural season was in 1974. That means Kelvin Davis, who would have been 15 at the time, could have watched the original New Orleans Jazz headlined by stars such as Pete Maravich and Gail Goodrich.
That original team only lasted four years, but Davis is still going strong. He mentioned in an interview that he loves the smile he brings to people’s faces when they see a man of his age play basketball. Davis added: “I like to encourage others. Don’t give up, to keep moving, and press forward.”
He’s stuck true to his word because he hasn’t given up. In 2006, at the riper age of 46, Davis played for the Atlanta Vision in the American Basketball Association. That was over 15 years ago, but the sport remains at the forefront of his life.
As for how he’s doing in the current tryouts, his contributions haven’t gone unnoticed. Squadron head coach Ryan Pannone remarked: “He (Davis) is pretty good. He’s grabbing rebounds, directing traffic. What else do you want out of a player who’s passionate?”
Although Davis is unlikely to be throwing lobs to Zion Willaimson in the Smoothie King Center, his story is remarkable nonetheless. I hope Kelvin Davis’ story can inspire anyone who thinks they are too old to chase their dreams.
https://pelicandebrief.com/2021/09/22/kelvin-davis-new-orleans-pelicans/
Loading