Young (6-2, 180) joins the Squadron, returning to play in the states for the first time since 2018 after spending the last three seasons playing in China with the Beikong Royal Fighters (2020-21) and the Nanjing Tongxi Monkey Kings (2018-20). Last season, he played in 48 games with the Beikong Royal Fighters and averaged 25.2 points, 5.0 assists and 6.1 rebounds in 31.2 minutes per game. His three seasons in China were highlighted with 22 double-doubles, one triple-double and 15 performances of 50+ points, including a career-high 74 points in 2020 with the Monkey Kings.

Prior to his time in China, the 6-3 guard from Houston played three seasons in the NBA with the Indiana Pacers after being drafted in the second round (43rd pick) of the 2015 NBA Draft. Over his three season in Indiana, Young played in 127 games, totaling 429 points, 119 assists and 130 rebounds.

Young played two seasons at the University of Oregon (2013-15) after transferring from the University of Houston. Over his two seasons in Eugene, he registered 1,388 points, the highest two-year total in the program’s history. Young was named the Pac-12 Player of the Year as a senior after logging 745 points, tied for the most in a single season in school history. His 20.7 points per game as a senior ranked ninth in the country and first in the Pac-12, while his 91 made three-pointers were second in the conference. 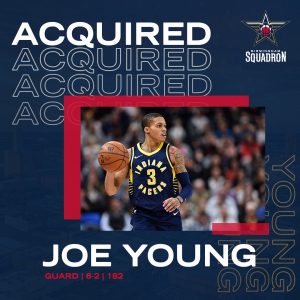 Griffin (6-7, 230) joins the Squadron as the team’s second-round draft selection (50th overall), his third season in the NBA G League. Prior to the Squadron, Griffin played a season with the Stockton Kings (2019-20) and a season with the South Bay Lakers (2018-19). Over his two seasons in the G League, the Houston native played in 49 games and totaled 219 points and 174 rebounds, scoring in double figures six times and notching one double-double.

Griffin was a two-sport athlete at Texas Southern University, playing basketball and football. On the court, Griffin was named the SWAC Player of the Year following the 2015-16 season after averaging a double-double in conference play.

The team’s full roster will be announced prior to training camp, which will begin on Monday, October 25 and will conclude with the team’s preseason matchup at the Gateway Center Area at College Park against the Skyhawks on Saturday, October 30 at 12:00 p.m. ET. 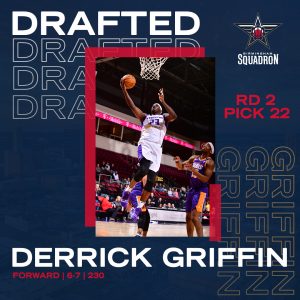