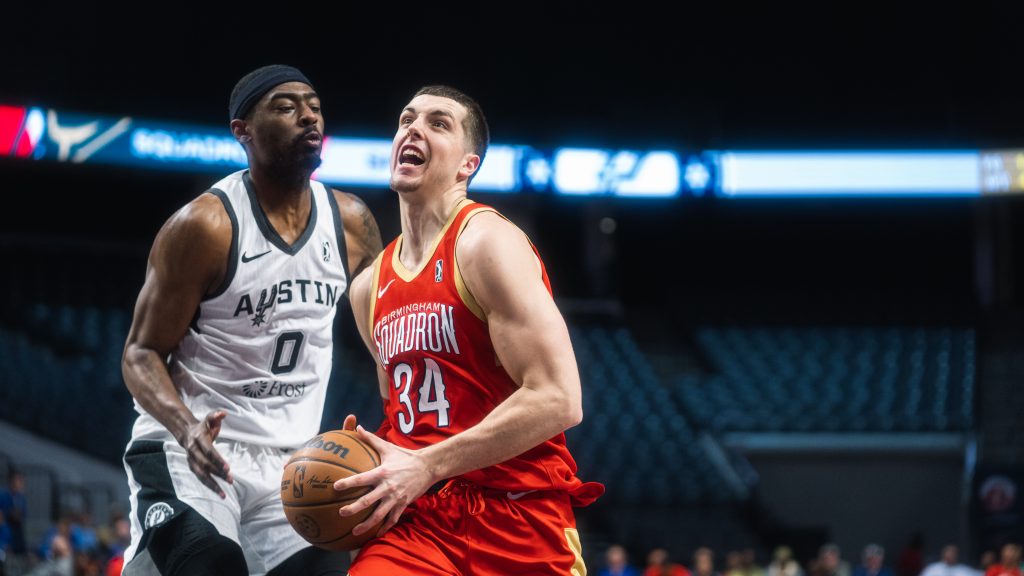 BIRMINGHAM, Ala. (March 15, 2022) – The Birmingham Squadron (13-12), NBA G League affiliate of the New Orleans Pelicans, defended their home court against the Austin Spurs (12-12) tonight at Legacy Arena, taking down the San Antonio Spurs affiliate in a tightly contested battle, 103-99.

Squadron center Zach Hankins established season highs tonight in both points scored and rebounds. In his fourth double-double of the season, Hankins logged a team high 26 points and 17 rebounds, beating out his previous highs of 19 and 16 respectively. While shooting 66.7% from the field, Hankins also posted five blocks and three assists on the night.

Much like Hankins, it was also a record night for Squadron guard John Petty Jr. who bested his previous season high of 14 points this season with 15 tonight. He also added seven rebounds, two steals and an assist.
Birmingham forward Zylan Cheatham also posted a double-double on the night with 11 points and 12 rebounds in the game, marking his ninth double-double of the season.

The Squadron was 100.0% (12-for-12) from the free-throw line tonight making all the difference in the four-point victory. This was the second time this season that Birmingham has gone perfect from the line as a team.
The Spurs were led tonight by forward Aric Holman who had 23 points followed by guard DJ Stewart with 16. Forward/center Robert Woodard II posted the team’s only double-double of the night (12 points, 10 rebounds).

With one day separating them from the rematch, the Squadron hit the road tomorrow, traveling to face the Spurs again in Cedar Park, Texas Thursday night at 7:30 p.m. CT.